I’m nearly finished outfitting my KS7.
I wanted to keep it as is slim as possible and I’m keeping the carry handle. I bought this gun for the look so I’m not messing with it. Keeping it simple and utilitarian.

The nylon shell carrier is just a mock-up. If I keep a carrier there I’ll be replacing it with a slimline or print something custom. With a low profile carrier there is about an 1/8 of an inch gap between it and the barrel. Added a small pic rail to the fore end just in case. I’ll be adding grip tape to the fore end e

I drilled a hole in my mag cap and bolted a sling mount on it. Used an old nylon strap to mount the other side under the stock.

A universal rubber pistol grip and grip plug from Amazon.

The buttpad is a knockoff but compatible to Limbsaver, may end up switching it with the Missouri Tactical buttpad.

Joined Jan 28, 2017
·
1,129 Posts
I've written this so many times people have gotta be getting tired of reading it. Firearms are as personal as underwear. If it works for you that's all that matters.

Why do you want to keep it slim? What function will that help it fill? I'm not writing a book and I won't attack you, I'm just curious.
V

BJK said:
I've written this so many times people have gotta be getting tired of reading it. Firearms are as personal as underwear. If it works for you that's all that matters.

Why do you want to keep it slim? What function will that help it fill? I'm not writing a book and I won't attack you, I'm just curious.
Click to expand...

the KS7 has a tall profile. I find keeping it slim makes it easier to handle/rotate and store. I also really prefer the look.

Keltec KS7
Joined 9 mo ago
·
23 Posts
I wanted a tool to help keep my family and livestock safe while being mobile yet effective. Very happy so far but haven’t got a sling yet after that I’ll always have her on my side. Love the simplicity and will keep it original to fit my needs.
B

Joined Aug 25, 2019
·
68 Posts
I agree that slimmer is better, simpler is better. Get it to how YOU want it and enjoy. How tight it your grip plug? Bought one from Amazon too but it could be more grippy. I have knocked it out a few times and figure recoil might knock it loose. 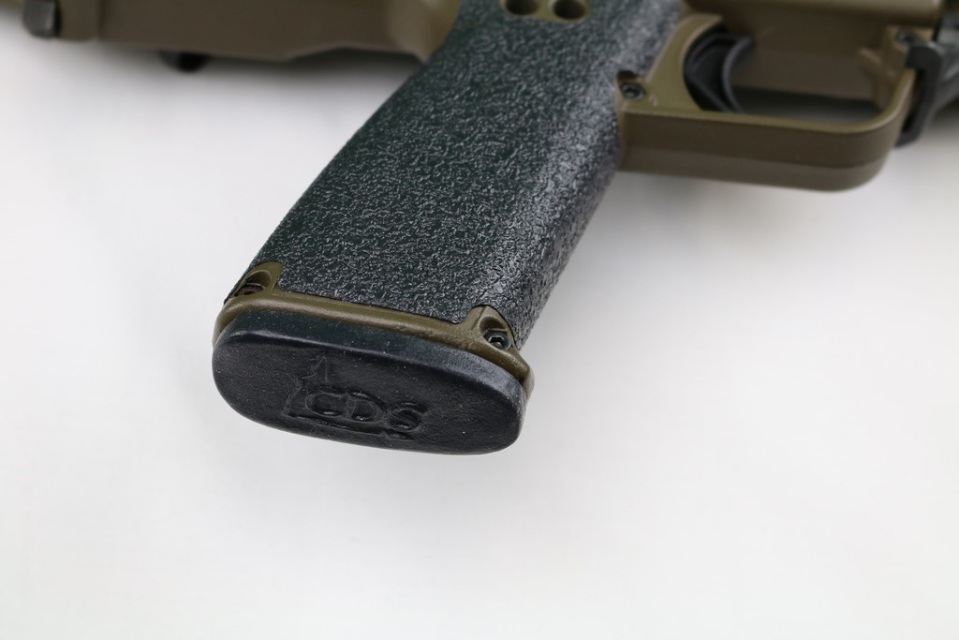 This plug is the only Grip plug custom designed and molded specifically for the Kel-Tec KSG, KS7 Shotgun grip. All other so called custom designed perfect fit plugs are molded for that black rifle and have an o-ring glued on don't fit correctly, and don't match the contour of the grip and...
www.convergentdesignsolutions.com

Keltec KS7
Joined 9 mo ago
·
23 Posts
It’s pretty good as far as not going to fall out but has the one shell holder inside but with recoil the round dose come loose so will just put other things inside.

Joined 22 d ago
·
24 Posts
I like that light set up. I have a very similar looking light already, what is the attachment you got there? Looks like a small rail in the MLOK?


Fargo Alspach said:
I wanted a tool to help keep my family and livestock safe while being mobile yet effective. Very happy so far but haven’t got a sling yet after that I’ll always have her on my side. Love the simplicity and will keep it original to fit my needs. View attachment 56788
Click to expand...

wtfisup said:
I like that light set up. I have a very similar looking light already, what is the attachment you got there? Looks like a small rail in the MLOK?
Click to expand...

Be careful with lights. If it points at a person the gun also points at that person*. I do use one on my HD gun, but it's a last effort at a target check, and has a laser aiming dot, so I'm about to ruin someones life. I far prefer a separate loose light for lighting things up in general. My loose light is slung crossbody and is fairly large with potentially lots of lumens that I'd never use indoors.

*What is one of the cardinal safety rules?

Joined 22 d ago
·
24 Posts
I thought about that as well and also have one on my 9mm however I am wondering what to do with the ks7, feel like it needs two hands to operate and in home defense night/darkness is likely to be the scenario. Any thoughts appreciated.

Joined Sep 7, 2021
·
336 Posts
If you live alone and you therefore will not encounter anyone in your home but an unwelcome intruder, then you probably don't need a weapon light. Consider pets, though. But if you have anyone else in the house with you, I think a weapon light with a momentary function is absolutely necessary to make sure you don't kill a friendly. Obvious tragedy aside, if you do shoot anyone but a home invader you will do prison time.
D

Joined Jul 17, 2017
·
555 Posts
The Kel-Tec shotguns do require two hands to operate, like all manually operated shotguns.
However, unlike standard shotguns, a bullpup can be easily held in a ready position with one hand, and the first shot can be effectively fired.
As example opening a door with a standard gun and the gun can't be held up in a firing position like a bullpup can.
The light can't be operated without the other hand, but then you may not need the light at that critical moment.

Everything with defense guns are compromises. The Kel-Tec guns fill a specific spot for an ultra-short shotgun that can be easily handled in confined spaces and still allow using a butt stock to position the gun and absorb recoil.

Joined Aug 25, 2019
·
68 Posts
short response:
ARA and DFARISWHEEL on point.
BIG fan of weapon mounted lights! I have one for every weapon I won. You have the option to use or not use it. You aren't likely to leave it on 100% of time but could if so desired. But if your hands are busy, the mounted light can help you positively ID target. 1 ounce of prevention is better than a pound of legal trouble.

Longer response:
Yes, a mounted light points where the gun points. You should be proficient enough to safely operate your weapon. That means practice and more practice. Finger on trigger only when willing to shoot... yadda yadda yadda. You can also carry a handheld light for searching off center.... OPTIONS!
What kind of light and where it is mounted will determine how useful it is to you:
What you have to determine is how to use a mounted light to your advantage... How you turn it on makes it useful or not.
Now this has been discussed in other posts, but the KS7 MLOK slots are not optimally located except for the largest of hands. Tail cap push buttons are hard to reach on handle. The red arrow shows entire hand has to rotate to get to tail cap. This is a distraction while using light to search in the dark unless you turn it on and leave on while searching which looks totally cool in the movies and may be good for you at home.


I currently use a pistol light mounted 90º on side: so normally on pistol you push inward; but on KS7 you push upward.
- Pistol lights with downward toggles would be outward on KS7 which is very awkward to use thumb to "pull outward"

I can toggle on/off without moving hand off pump.

Here is a top view of 2 different lights and how the switches differ.


your mileage may vary
B

Joined Jan 28, 2017
·
1,129 Posts
Someone, I can't remember who, maybe the folks who make the howitzer brake(?) also makes a dropleg seen here with a flashlight. Since it has a pic' rail it'll accommodate lots of items. It moves the accessory down for a more convenient placement near the pump. In the photo it's seen on it's side and "hanging down" from the pic' rail that runs along the KS7.

That's the best I found but is at least 2 years old so maybe there's better available today. FWIW, the flashlight is no longer mounted, instead it now holds a laser/light. 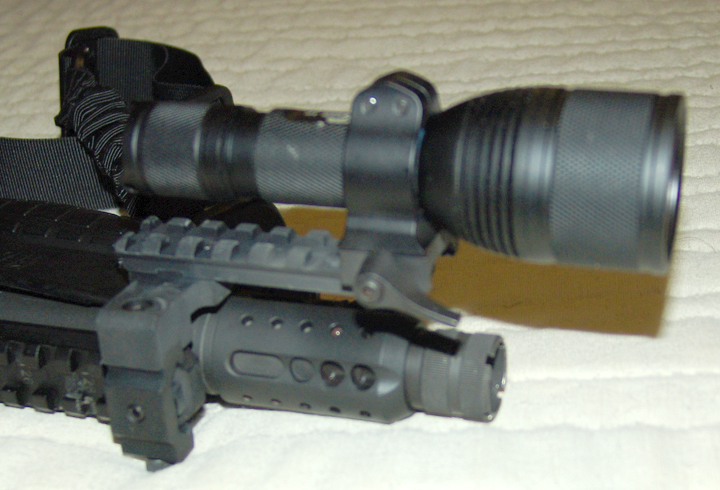 Joined Aug 25, 2019
·
68 Posts
If U look at my pictures 2 posts above, you will notice a lower 1913 rail below flashlight and the pistol laser/light is mounted on it which is significantly lower than handle slots.
D

Joined Jul 17, 2017
·
555 Posts
To my opinion, the perfect Kel-Tec light would have a pressure switch that attaches to the pistol grip below the trigger.
A long cord would run to wherever the actual light would be mounted.

The light itself would be turned on with a press of the switch, then go off instantly the pressure is off the switch.

Some method would be required to secure the cord to the gun so as to not interfere with operation, possibly screws or a very aggressive tape.

An instant on-off light gives a momentary illumination, but then instantly goes off to prevent making yourself a target.
I don't know if anyone makes a light that does that, the few I ever looked at seemed to be switched on then have to be switched off by pressing a button, or provide a strobe.
It would seem the best light would give a flash illumination for targeting then instantly off.

Joined Aug 25, 2019
·
68 Posts
Someone put tape switch on one side of pump where thumb can push it and light on other side. Thought that was interesting. Only negative I could think of was light gets double stress (once during shot recoil and another during cycling).

I use support hand to activate all my current lights whether pistol or long gun. From a “manual of arms” aspect, I’d like to keep light manipulation as consistent as possible between firearms.

If switch is on grip, then trigger hand has double duty - operating light and firing shotgun. Would have to practice that to see if I like that. I could see using light on and off and in an instant having to choose to fire and either accidentally cycling light again or releasing light and firing into blackness. Like I said, I’d have to practice to see how easy or hard that would be but it is on a non-moving part which is a plus.

As far as tape switches, many have momentary on/off and constant buttons. Crimson Trace CW-102 for one comes with tail cap and tape switch for options. This is but one of many I am sure, but this is my "infamous" Lo-Hi-Strobe light. With both types of activation modes, I thought this would be optimal. I didn't count on the 3 mode cycle being hard to predict. It is all in the pause between presses - too short and it cycles to next mode, too long and it repeated previous mode. (the cord is longer than depicted)